I had posted before about Jane Kim and her InkDwell team painting a wall of birds for Cornell Lab of Ornithology. Now you have the best, most interactive way to view them up close and personal. There are more than 700 images and the detail is incredible. 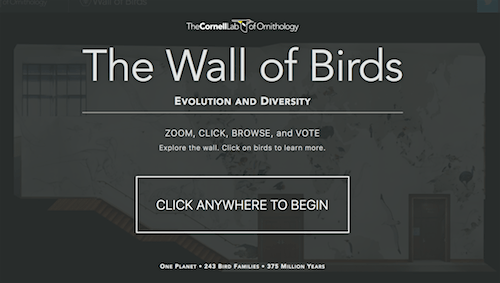 Here’s another bird wall worth checking out in this time-lapse video of the Tautoko mural, honoring the endangered Kuaka bird painted by Charles and Janine Williams at Napier Port for the annual Sea Walls: Murals for Oceans street art festival. The event took place in New Zealand this year. Click to read previous posts regarding this event. 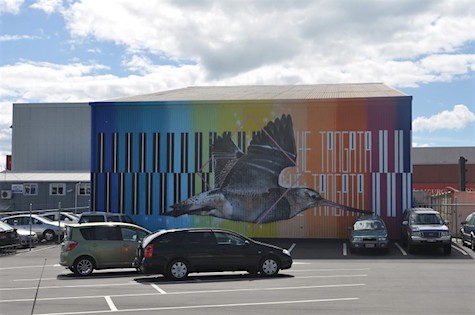 My original intent was to post my Slipcovers for your walls, casartblog post here this week but then I received these incredible pictures of animal sculptures made with cut paper. I’ll do a little of both. Plus, you’ll see an appropriate mention at the bottom in light of Mother’s Day this Sunday.

Firstly, here’s a snippet of the Animal Inspiration post:

I recently learned of a new video about one of my favorite artists, Jane Kim, of Ink Dwell Studios. The video not only depicts her creative process but explains how she paints with Nature always in mind, through animal inspiration.

Jane’s artistic talent is tremendous as is some of her projects.

We’ve posted about Jane and Ink Dwell previously regarding the project (and here on AIE), in which she used Casart wallcoverings as templates to paint the continents for her exceptional and huge mural at Cornell University’s Ornithology Lab. 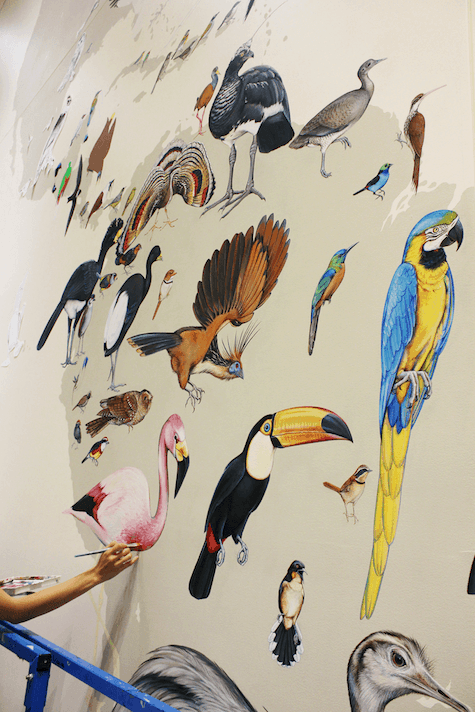 Jane has also completed an ocean collage mural at Baltimore’s National Aquarium, which I’m dying to go see, using a combination of paint and cut paper techniques, and that perfectly leading into part two of this post.

Click here to read more of the full story...

Another amazingly talented artist using Nature and animals as their inspiration is Calvin Nichols. He creates incredibly intricate paper sculptures. He’s such a keen observer of his subjects. It’s almost as if he’s created a 3D format for scientific illustration. I love how the pieces break their framed boundaries, which is very indicative of trompe l’oeil artwork, but this is not because you know it is not real, however, the intricacy and detail is just as jaw- dropping in wonderment.

(Most of the wording below is taken from the email that I received — so I cannot take credit for it.) 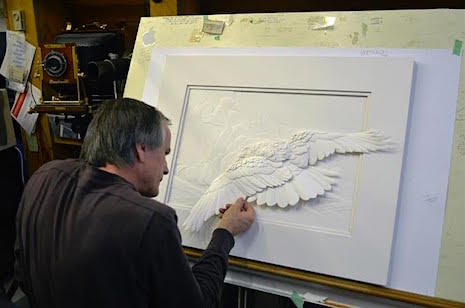 He has worked 25 years to perfect his method. First he draws his subject, then he cuts paper shapes to create the foundation or form upon which more intricate cut paper is adhereed on top. It must take pain-staking patience. (Something I lose more and more as I get older.) 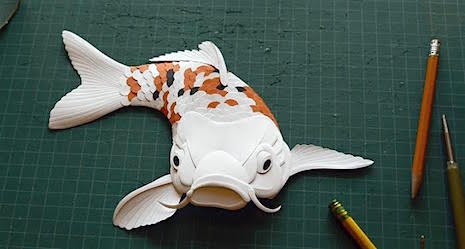 But he doesn’t just draw on it. He shapes it to create intricate works of staggering detail and beauty. 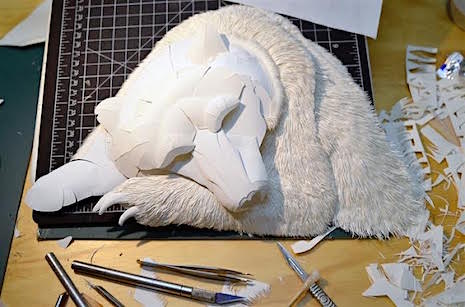 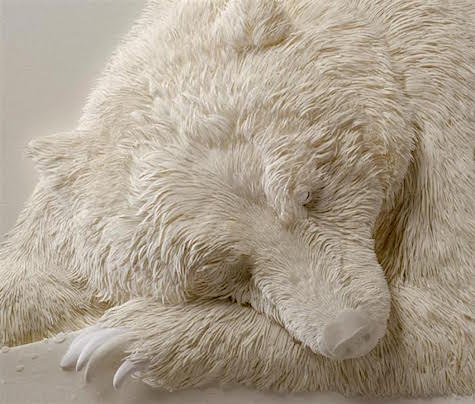 To make the art, he starts by observing real-life animals and their movements. He takes numerous sketches that he will later use as reference for his paper art. He then cuts up thousands of tiny pieces of paper and pastes them together to form each animal. 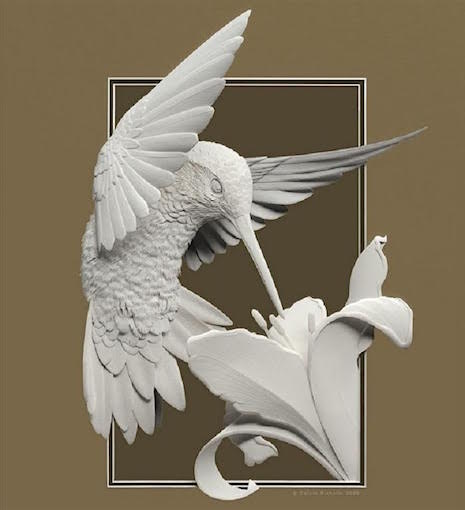 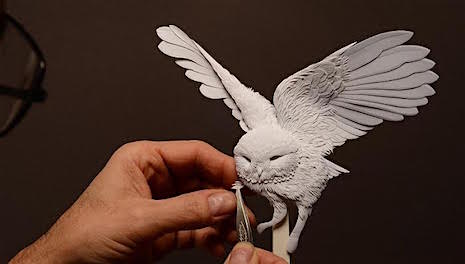 The texture he is able to achieve with this technique is astounding. Given that he’s only working with white paper, the details must be exactly right in order to create the appropriate depth and shadowing. Each small piece can take many weeks to complete. 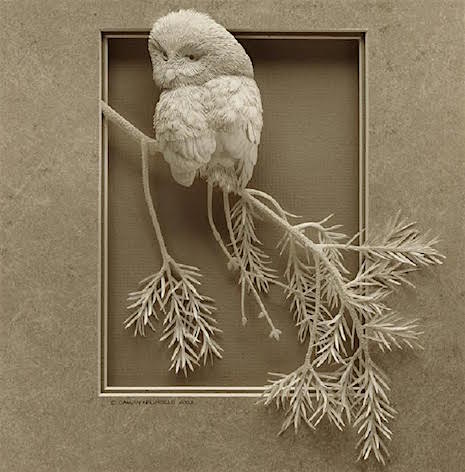 It’s incredibly delicate work. Each small piece can take many weeks to complete. 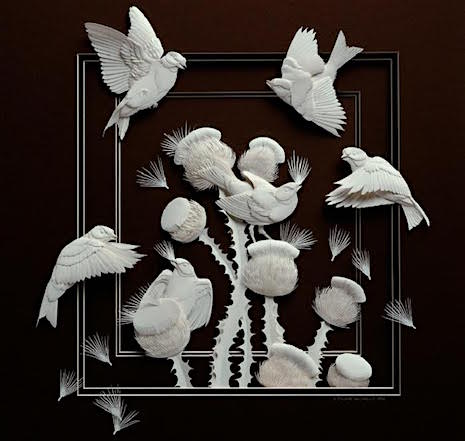 While the bigger ones can take months, or even years. 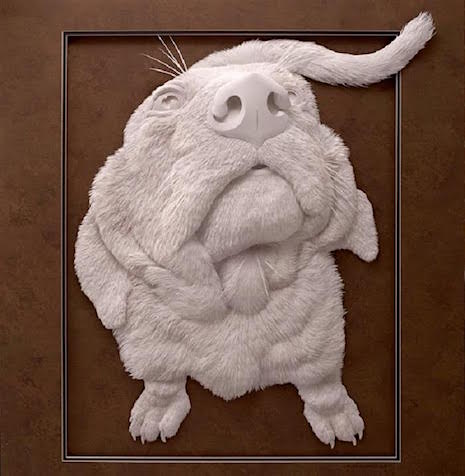 The texture he’s been able to achieve gives the illusion that it must be soft. Make you want to touch it to find out. 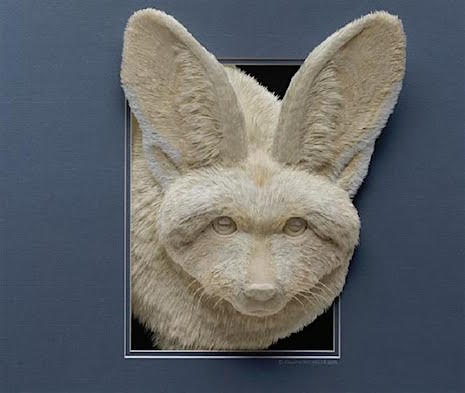 His work has been featured in National Geographic, as well as numerous galleries and art shows all over the world.

The porcupine is probably my favorite with all those wispy paper pieces. 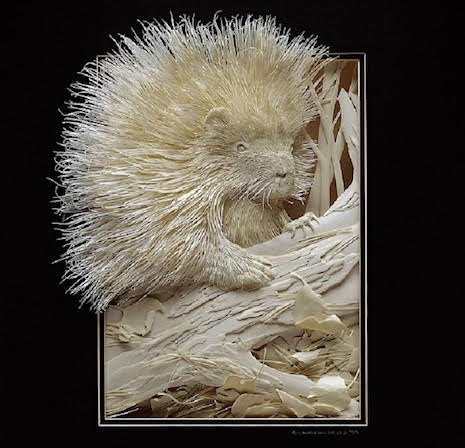 He uses X-ACTO knives, scalpels, and scissors in the construction of his critters. 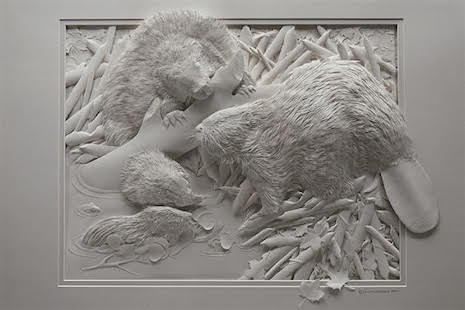 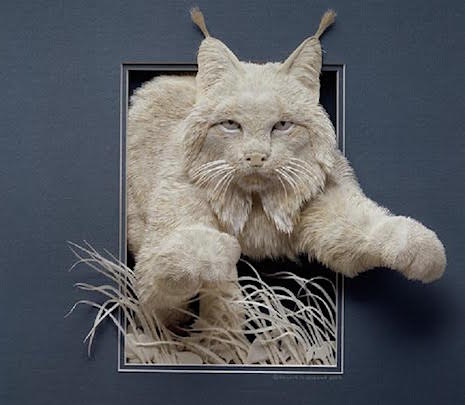 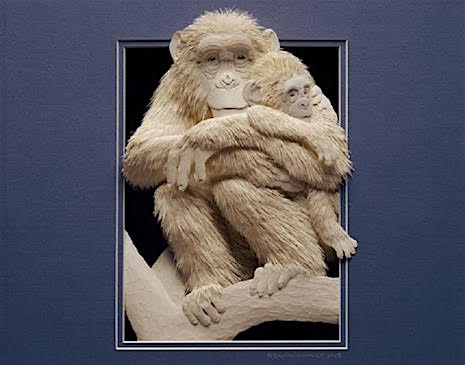 This intricacy of this money and his face captures our emotion when viewing. 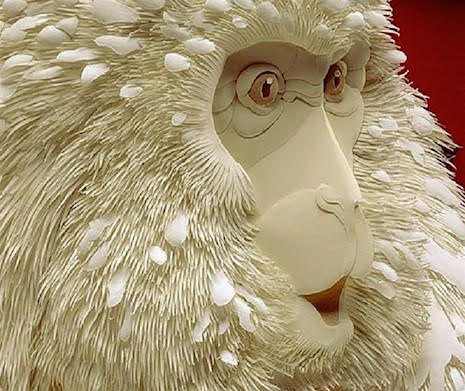 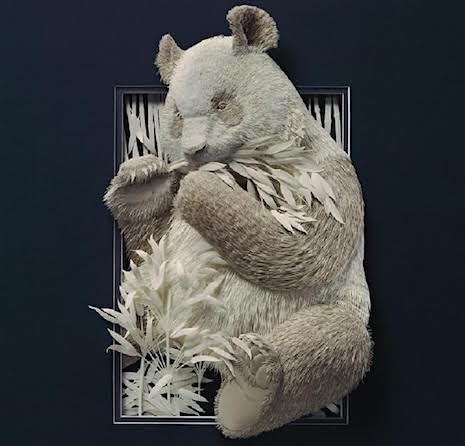 The commitment these amazing pieces of art require is just mind-blowing. Can you imagine how frustrating it would be if you messed up a little detail on those pieces? Talent like this just doesn’t come around that often.

I’m not sure how he was able to achieve the realism of these zebras with different colored paper but his work is for sale and he does demonstrations, so worth looking into. 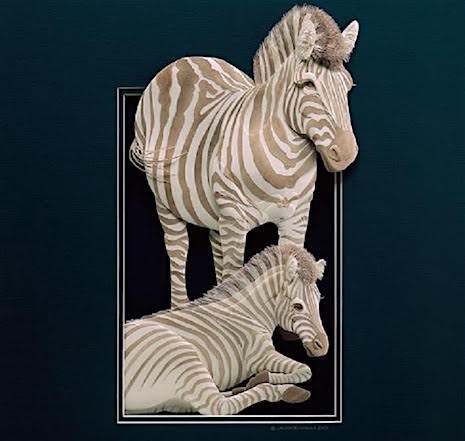 If you’d like to learn more, for there is not much info about this artist on his website except that he is from Canada, go to his Facebook page to see his most recent news.

In keeping with our animal inspiration theme and with Mother’s Day this weekend, here’s a beautiful mural that could use some motherly care in the Mothers Building, which was originally designed to be a resting place for nursing mothers at the San Francisco Zoo. The building, with its Greco-Roman style and WPA project murals, was built in 1925 but has been closed to the public since 2002. The murals visually depict the story of Noah’s Ark in the largest existing, egg tempera work in the Western US. They could soon be lost and are in need of repair. Click here to read more of the story. 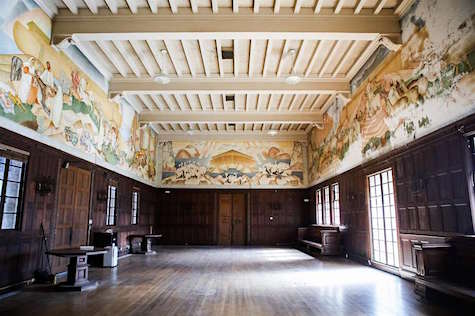 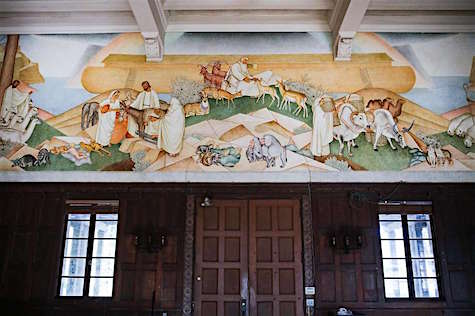 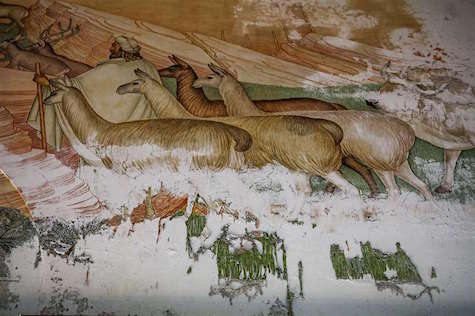 Regarding Images used: I do not claim ownership of any of the images posted on this blog (unless stated otherwise). I try my utmost best to give credit from original sources. If you have ownership rights of a photo and wish for me to remove it, please don’t hesitate to contact me.